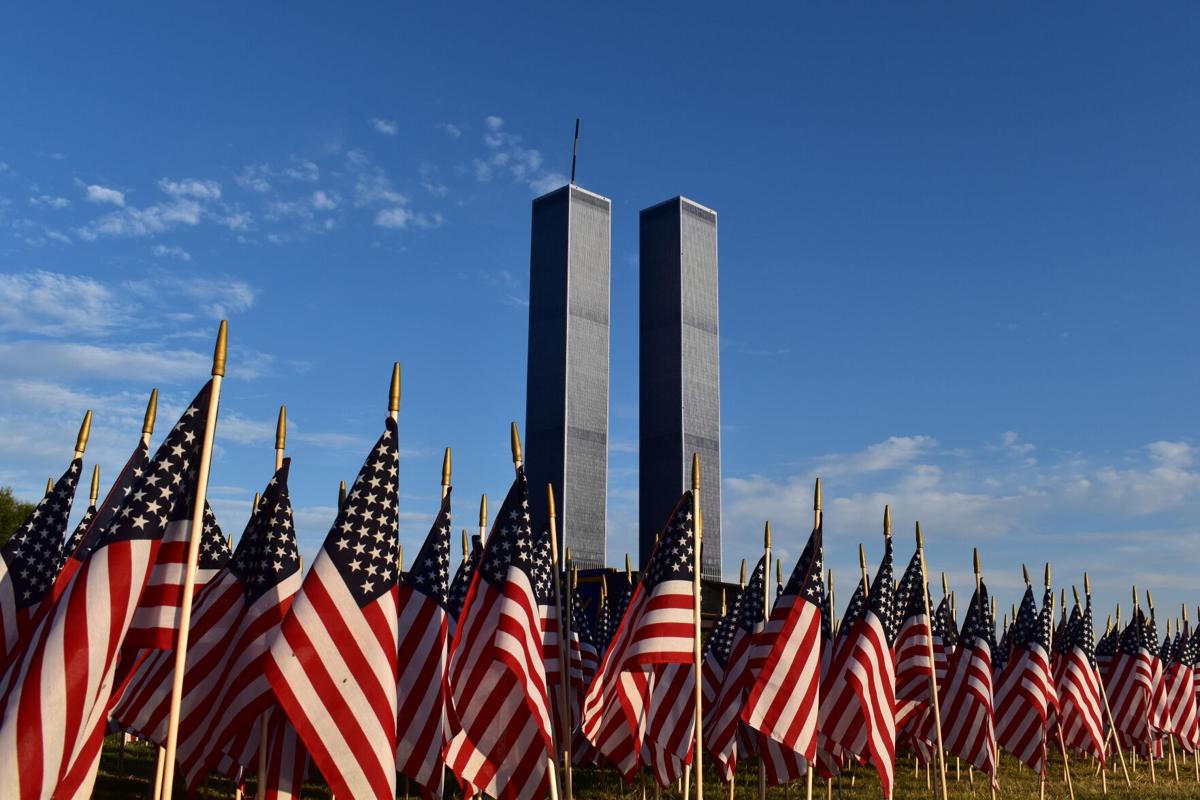 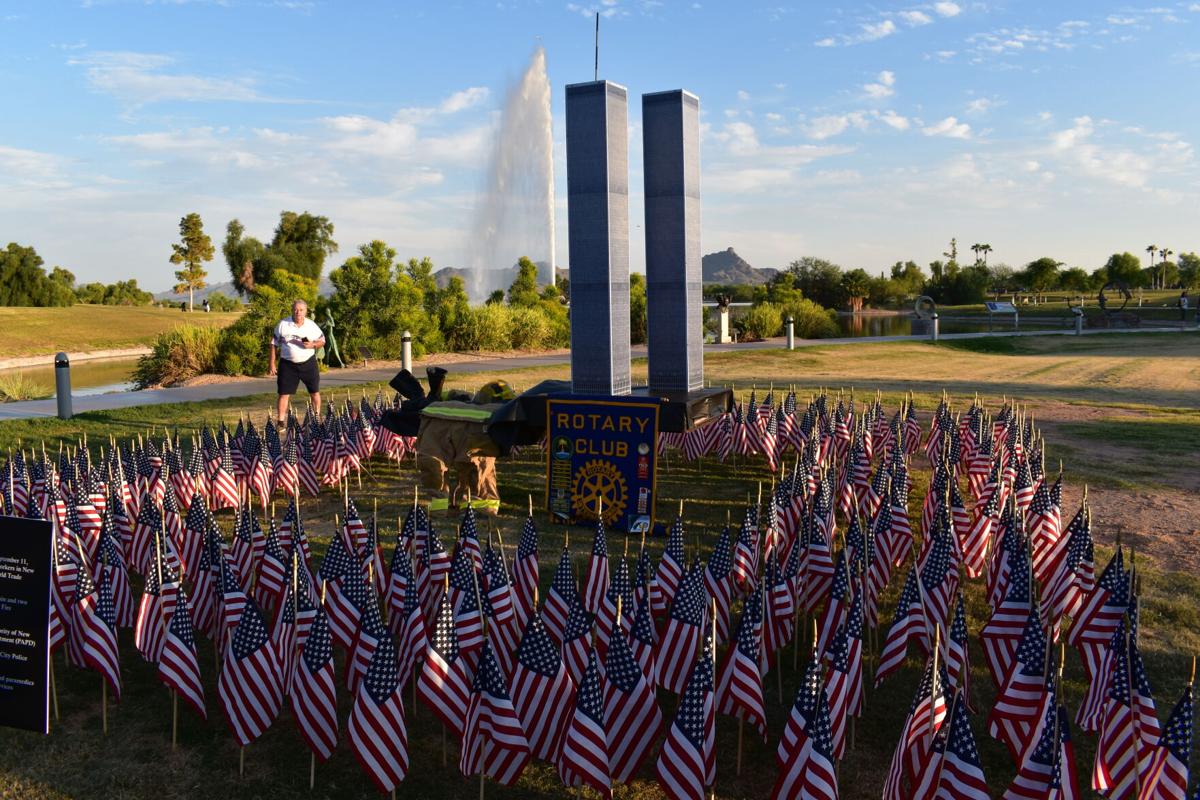 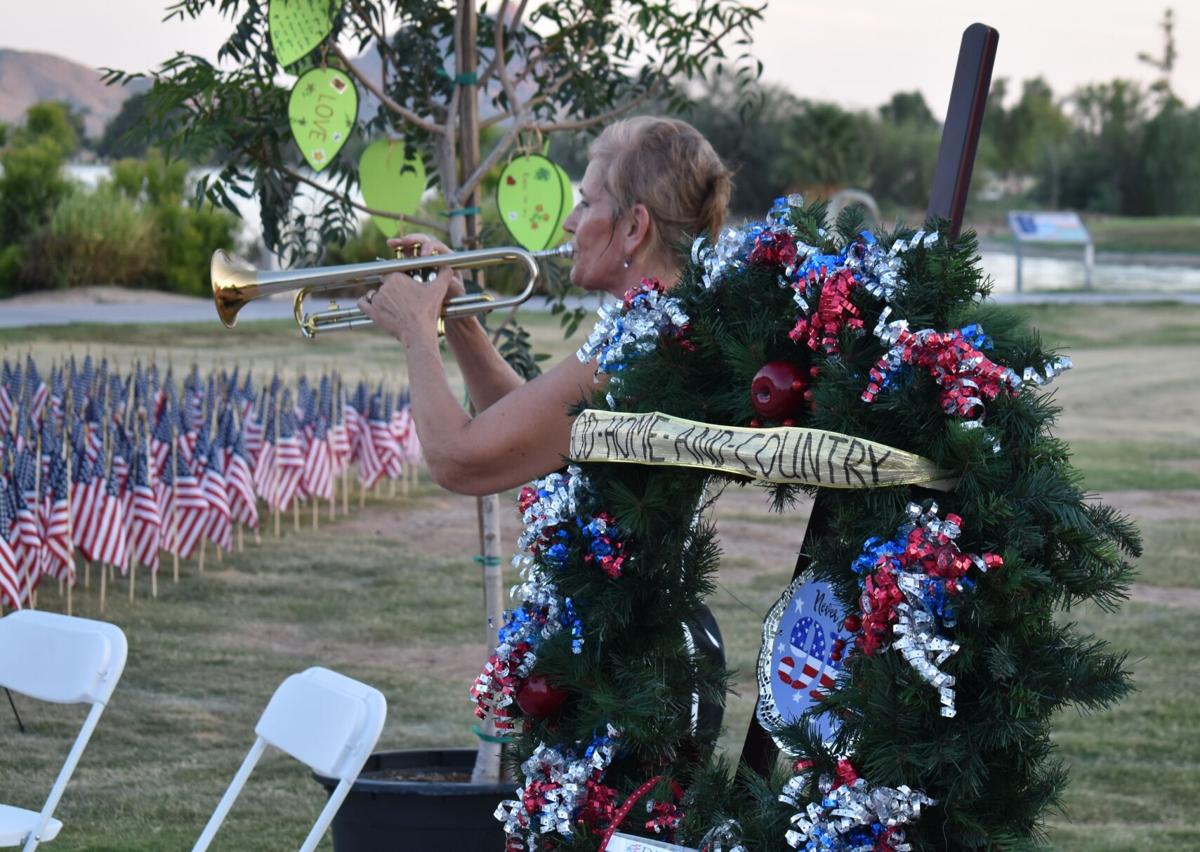 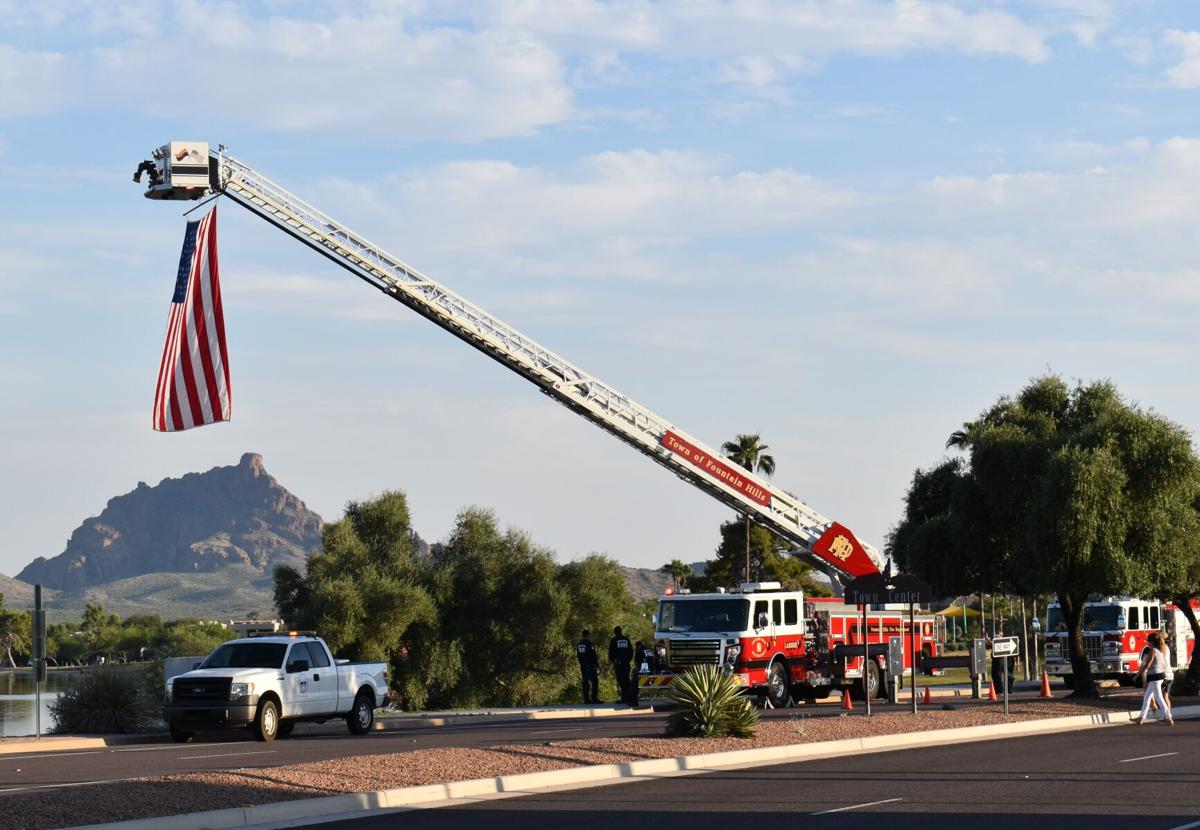 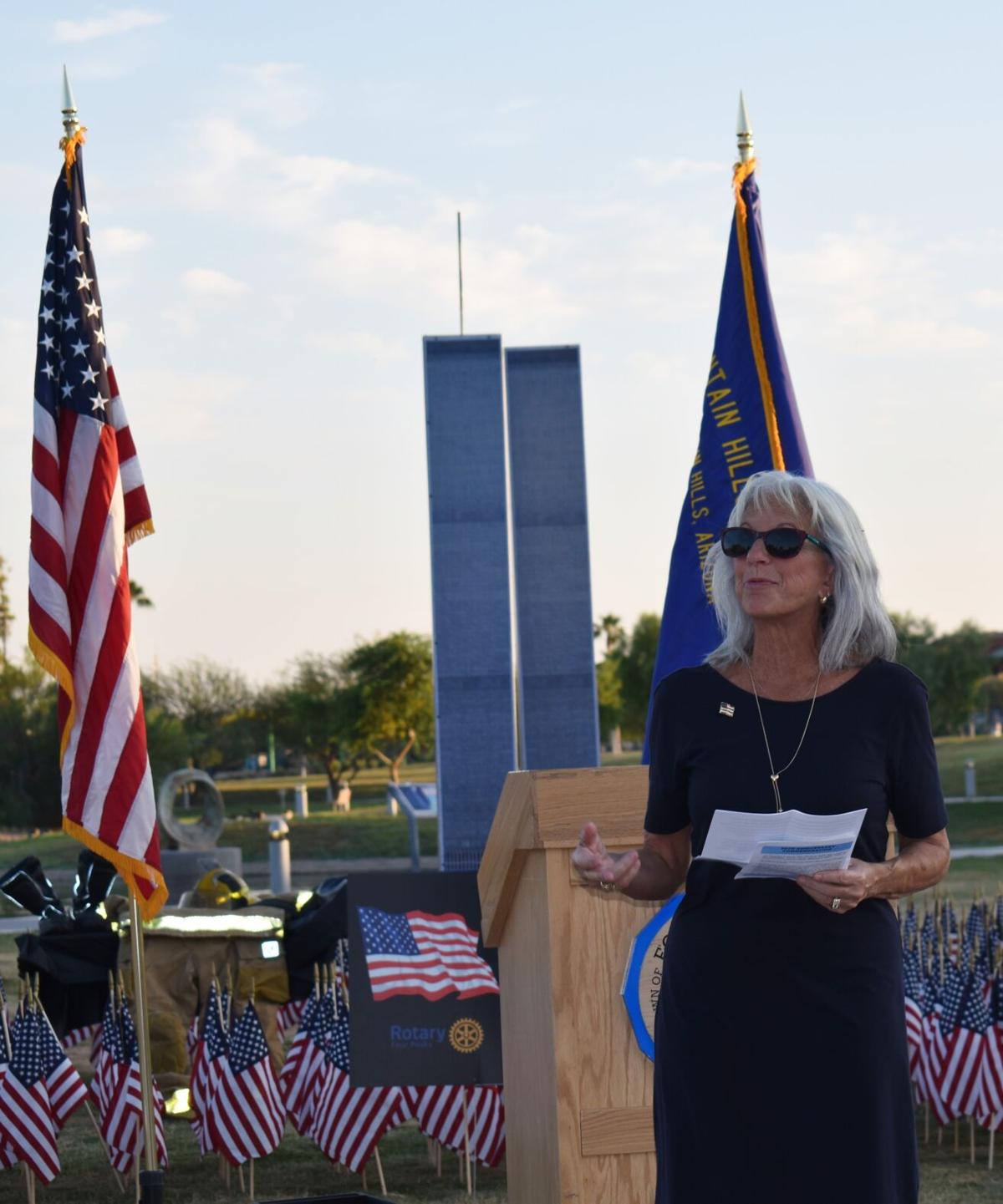 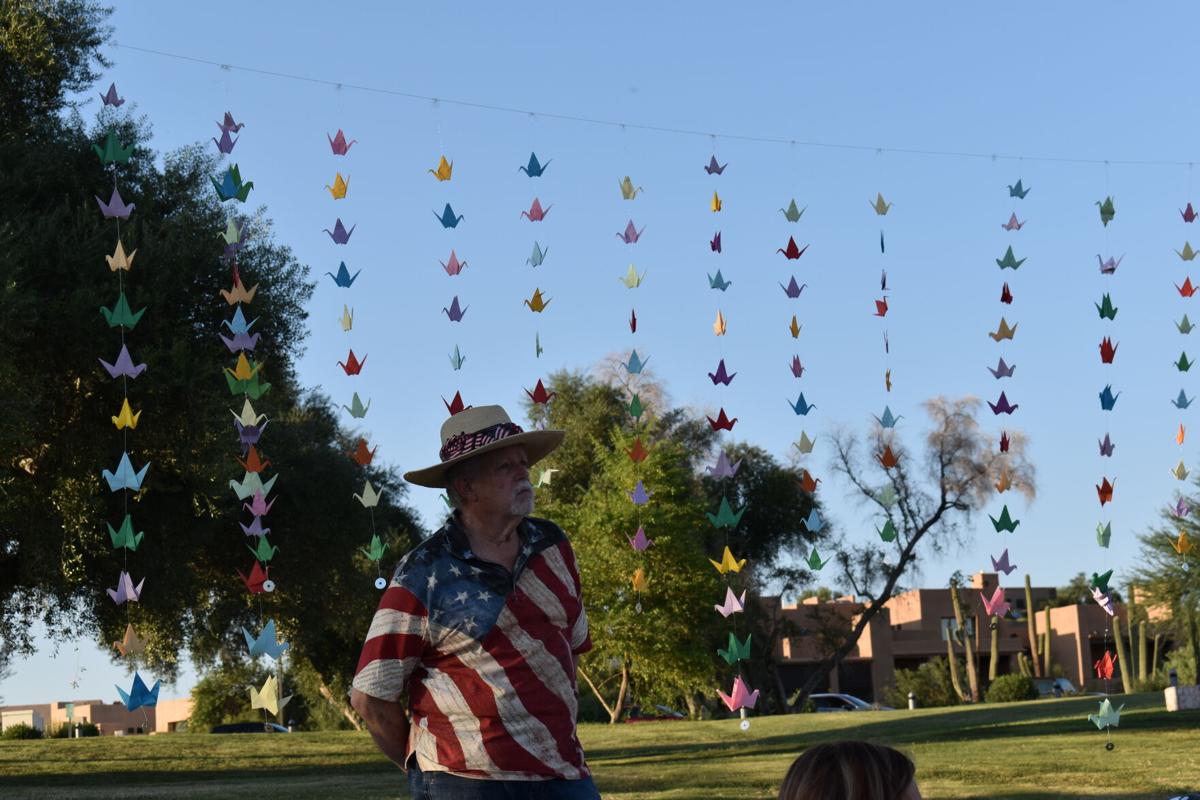 Fountain Hills was among no doubt thousands of communities nationwide that paid tribute to the victims, both surviving and deceased, on the 20th anniversary of the attacks of Sept. 11, 2001, this past Saturday.

Mayor Ginny Dickey led the commemoration at the amphitheater in Fountain Park Saturday evening with more than 100 in attendance.

Dickey acknowledged Michael Taddonio, a cousin lost in the attack, her father, Vincent Russo, whose sculpture “Brothers” depicting police and firefighters in the attack, is on display in the Town Hall lobby, as well as her son, Brian Chin, a Scottsdale Fire captain who participated in that city’s ceremonies earlier on Saturday.

In a town proclamation from Dickey, she said, “Sept. 11, 2001, the United States endured the most devastating terrorist attack on American soil leading to the tragic deaths and injuries of thousands of innocent people.

“Twenty years later the country continues to, and shall forever, mourn those who lost their lives at the Pentagon, the World Trade Center and in a field in SW Pennsylvania.

“Many first responders, rescue and recovery workers, volunteers, and survivors of the attacks continue to suffer from serious medical illnesses and emotional distress related to the physical and mental trauma of the tragedy.

“The world witnessed and shared in the tragedy, and America was united under a remarkable spirit of service and compassion that inspired and helped heal the nation.

“On the 20th anniversary of this heartbreaking day, the Town of Fountain Hills recognizes September 11th as a day of solemn commemoration and extends deepest sympathy to the thousands of innocent victims, and to their families, friends, and loved ones.”

Dickey also read remarks from Councilman David Spelich, who was unable to attend, but as a law enforcement officer offered his thoughts.

“It’s hard to reconcile the fact that the events of 9/11 occurred 20 years ago, but we must never forget. As we commemorate the 20th anniversary, with heavy hearts we remember the victims, and the first responders who lost their lives in this heinous attack,” Spelich said.

“Yet, this moment also represents Americans at their very best, demonstrating bravery, courage and sacrifice when confronted with unfathomable evil. We should never forget we are one country, and one people united, even in these days.

“We are forever changed but let us never forget the resolve we have as Americans – for America.”

Kratzer urged people to never forget the events of that day.

“Remember those who lost their lives and those survivors with lingering medical issues,” Kratzer said. “Remember the countless acts of heroism by ordinary people, and never forget the way we came together following the tragedy.”

FHFD Fire Marshal and Assistant Fire Chief Mike Winters made comments in support of the World Trade Center Health Program with thousands of volunteers addressing the medical needs of those survivors of the attack and those who spent months at ground zero surrounded by contaminated earth and air.

“It is estimated that 15% to 20% of first responders suffer from PTSD,” Winters said. “Other volunteers including construction workers still have needs as a result of the attacks.

“Observe a moment of silence for those lost on Sept. 11, and those who have lost their lives since.”