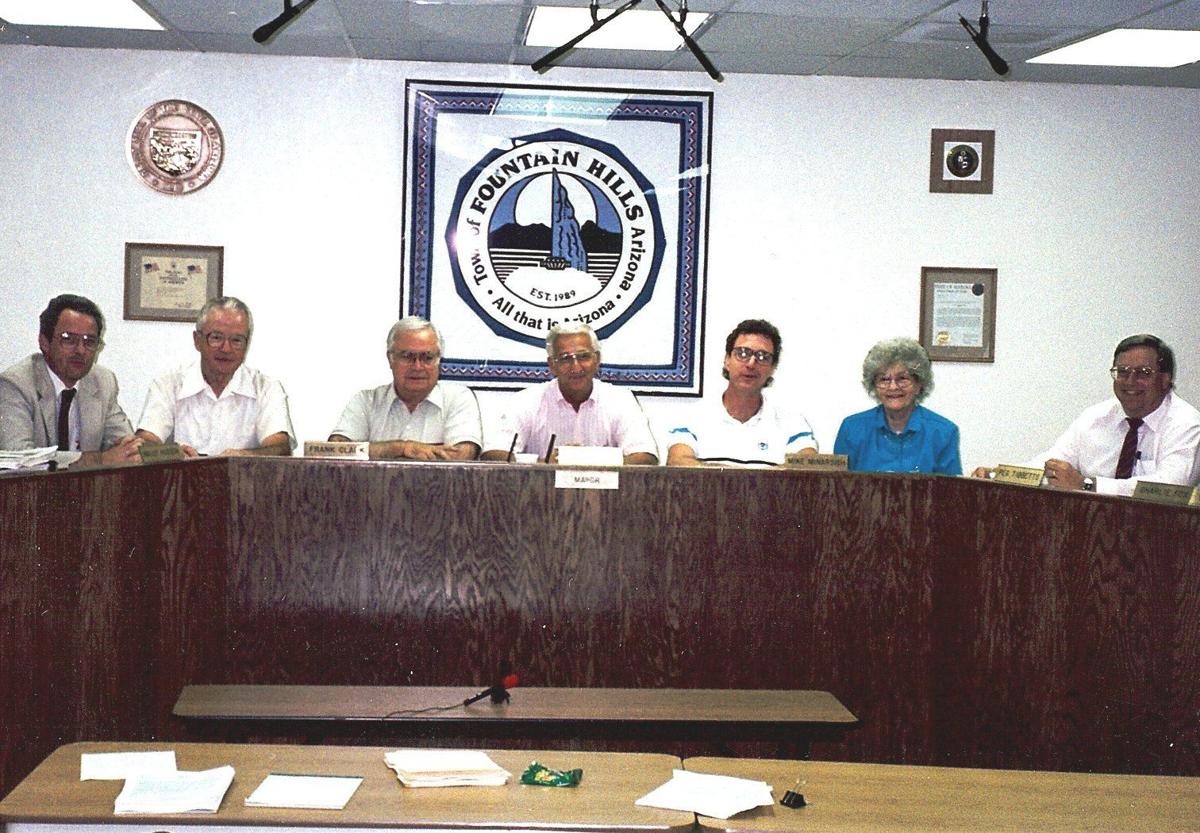 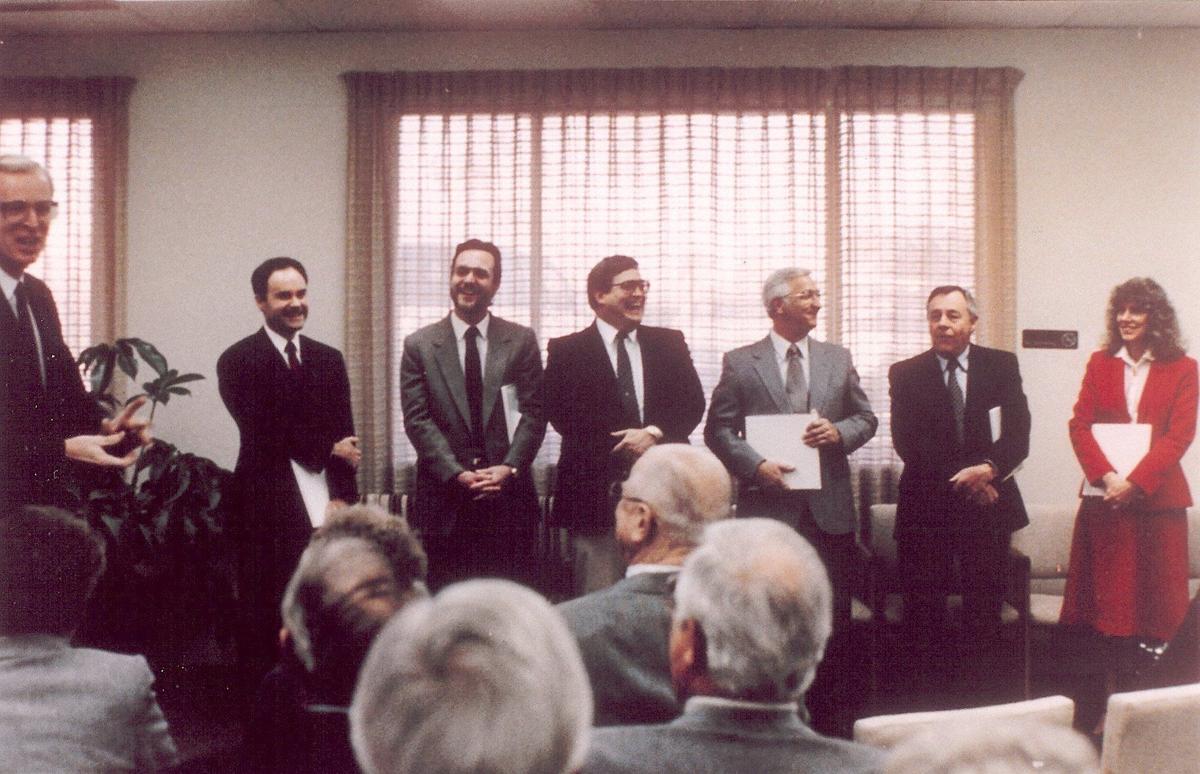 This week marks the anniversary of the election that incorporated the Town of Fountain Hills as a municipality. Citizens went to the polls on Dec. 5, 1989 and voted to become an independent community.

The third time was the charm in the attempt to incorporate, with earlier votes in 1985 and 1988 going down to defeat.

Cassie Hansen, who was relatively new to town at that time, is credited with the campaign slogan that got the attention of voters, “Control Your Fate, Incorporate.”

John Cutillo, who participated in all three efforts, chaired the winning campaign committee and went on to become the town’s first mayor, said he remembers the incentive.

“At the time we were paying $2 million to Maricopa County and we were getting hardly anything for that,” Cutillo said. “There was little in the way of police protection or street maintenance.”

He also noted that any permits needed for building or business had to be obtained from county offices 30 miles away in Phoenix.

“The idea of our own hometown, locally governed by our neighbors, was important to many,” current Mayor Ginny Dickey said. “It gave us a better opportunity to be part of the type of community we would be in the future…being developed with sensitivity to the existing terrain and views, and providing amenities, services and public safety that were desired by the residents.”

After the vote confirmed the incorporation one of the first duties was selecting the Town Council that would be responsible for getting things off the ground. Jim Bruner, at the time the Maricopa County Supervisor for the district, interviewed and selected the interim council members. They included Cutillo, Harry Barber, Joe Bill, Charlie Fox, Dick Haugen, Marti Lemieux and Mike Minarsich. They were sworn in on Jan. 5, 1990.

They found there were many challenges when starting with a clean slate.

Organizing a new municipality had a lot of unanticipated challenges, according to Hansen, who was the town’s first clerk, a job she held for about 13 years. She later served two terms on the Town Council.

“[Organizing a new town included] things we take for granted like getting office space, establishing telephone service and other operational services, establishing a bank account, getting insurance and staff,” Hansen said. “All things you have to do when starting a business, only more so because there are an abundance of statutory requirements to satisfy, including initial town ordinances and resolutions to adopt and operations functions that need to be put in place.”

Cutillo said they were also starting with no money.

“We had to borrow,” he said. “One of our first real endeavors was addressing roads. We came up with a plan and got it done.”

The Road Districts, which were dysfunctional for a lot of reasons, provided some of the impetus for getting voters on board to support incorporation.

Citizens also came aboard to help out with the organizing efforts. Some 18 committees were established to work on everything from ordinances to finding quarters for offices. Hansen recalls much of the early work being done at her kitchen table with the assistance of interim Town Manager Mike McNulty.

“One of my first tasks after being appointed to [the council] was to lead the effort to identify our first town manager,” Joe Bill said. “I felt that I had a very lucky day when Paul Nordin presented himself as a candidate.”

An election had to be organized and held in May for the first elected Town Council. They were sworn in June 7, 1990 and included Cutillo, Charlie Fox, Wally Hudson, Mike Minarsich, Peg Tibbets, Frank Clark and Dr. Bill O’Brien.

Nordin, who came from Benson, Ariz., was hired in June and the town began its first day as a municipality on July 2, 1990.

The timing of incorporation was somewhat serendipitous. The 1990 Census showed Fountain Hills with approximately 10,000 residents. First reports had the number at 9,848, however Census records for 1990 have the town at 10,030.

Over the next decade the town grew to 20,235 residents and was one of the fastest growing communities in the nation during the 1990s. During that first year of the decade construction began on the shopping plaza were Safeway is located. Walgreen’s was the other anchor tenant at that time, with the store since moving. Mayo Clinic broke ground on phase 2 of its Shea Blvd. campus, just over the hill in Scottsdale, and discussions began for a bond to fund the high school campus.

Rena Creta and her husband, Ken, came to Fountain Hills in 1980. She is the sister of Mayor Ginny Dickey. Creta said she thinks Fountain Hills has accomplished a lot in the 30 years since incorporation, including the approval and building of the high school.

“High schoolers were no longer required to be bussed to Scottsdale [or Mesa],” Creta said. “We created the parks and added playgrounds; roads were built where gravel was the only way to some homes, beautiful homes were built and stores were added or expanded.

“Who would have thought there would be more than one actual stop light?”

Hansen said things really got rolling through that first decade.

“Much has been done in the past 30 years, but the first 10 marked the most significant landmark achievements,” Hansen said. “It was a phenomenal time to be part of the town’s development and one I will never forget or regret.”

Like many people, Cutillo moved here from elsewhere, in his case New England, to become a part of the foundation of Fountain Hills.

“I’m glad we made the move here,” Cutillo said. “I’m glad to have served the community, and think the town is doing well.”