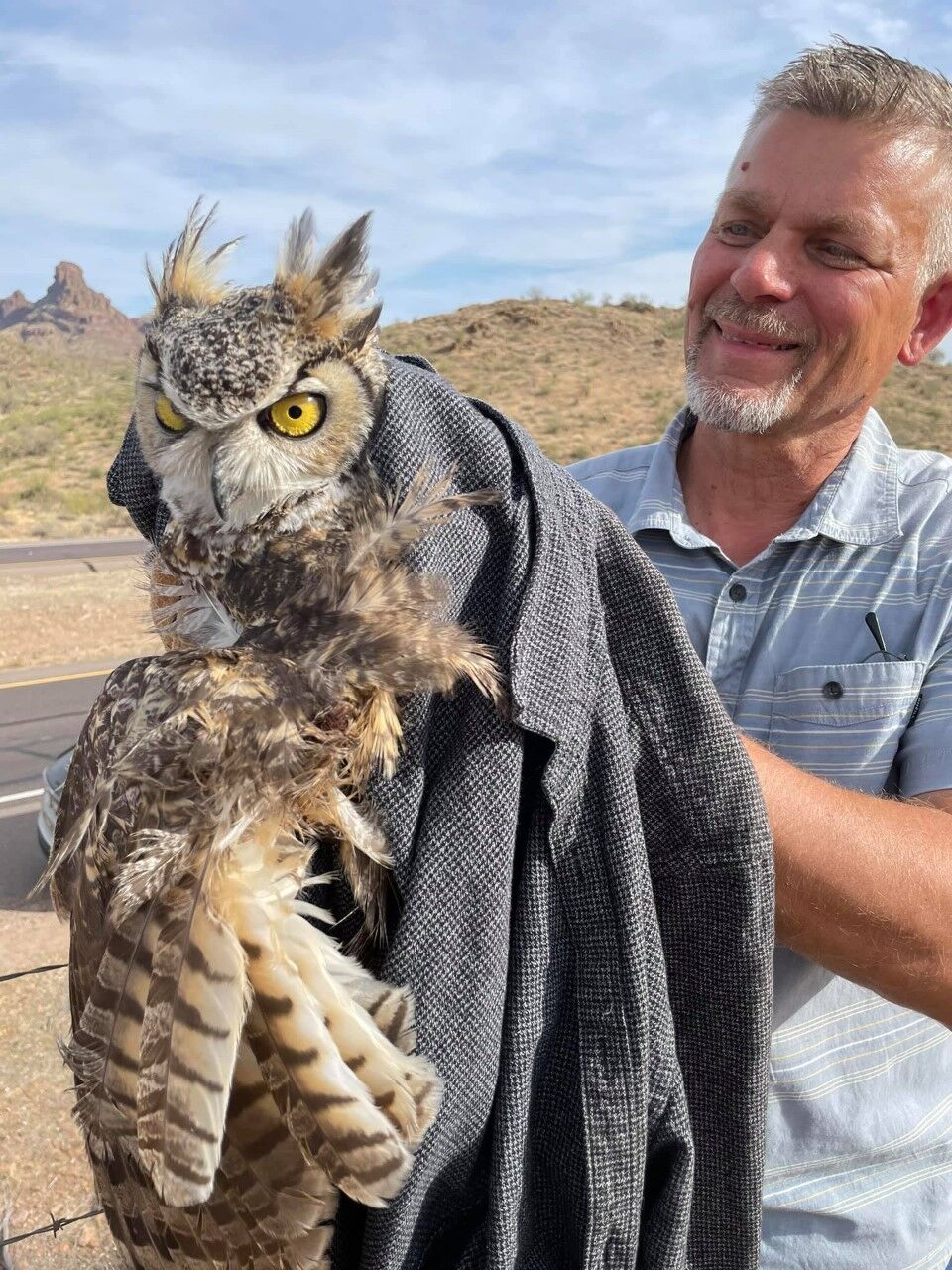 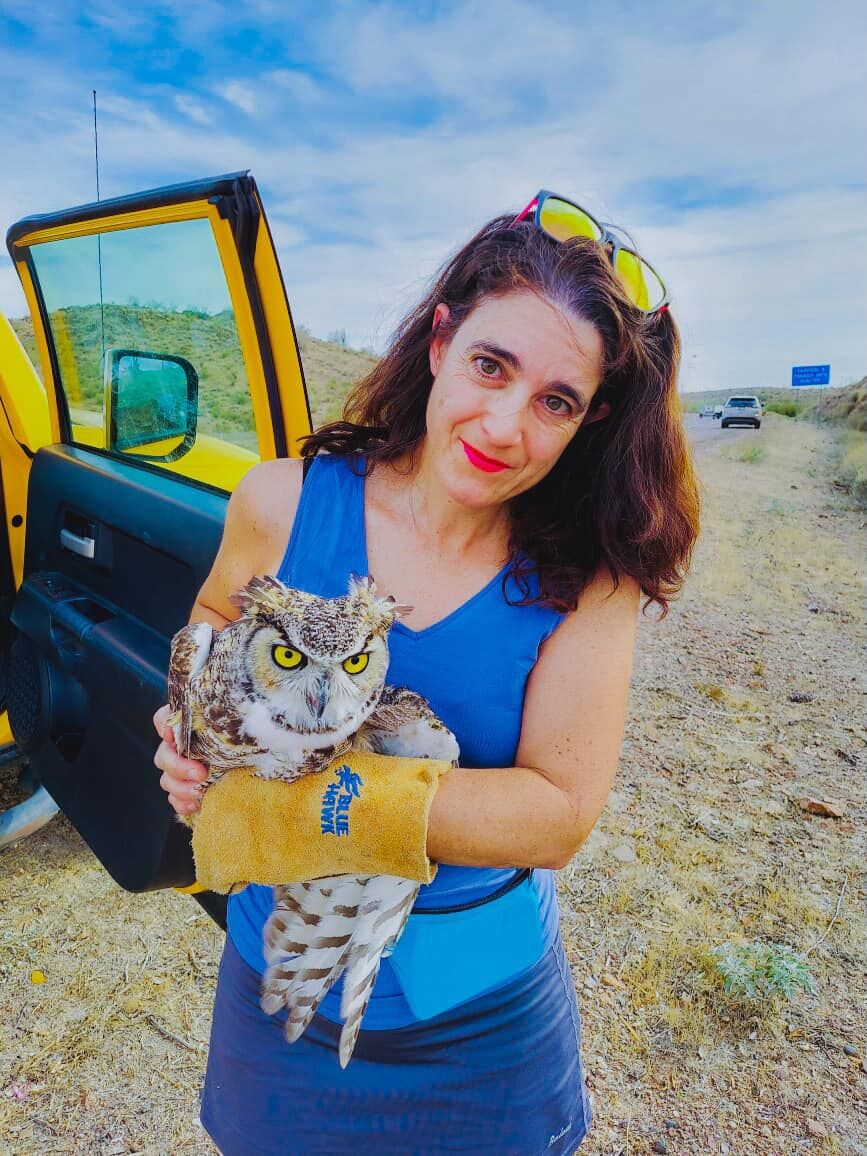 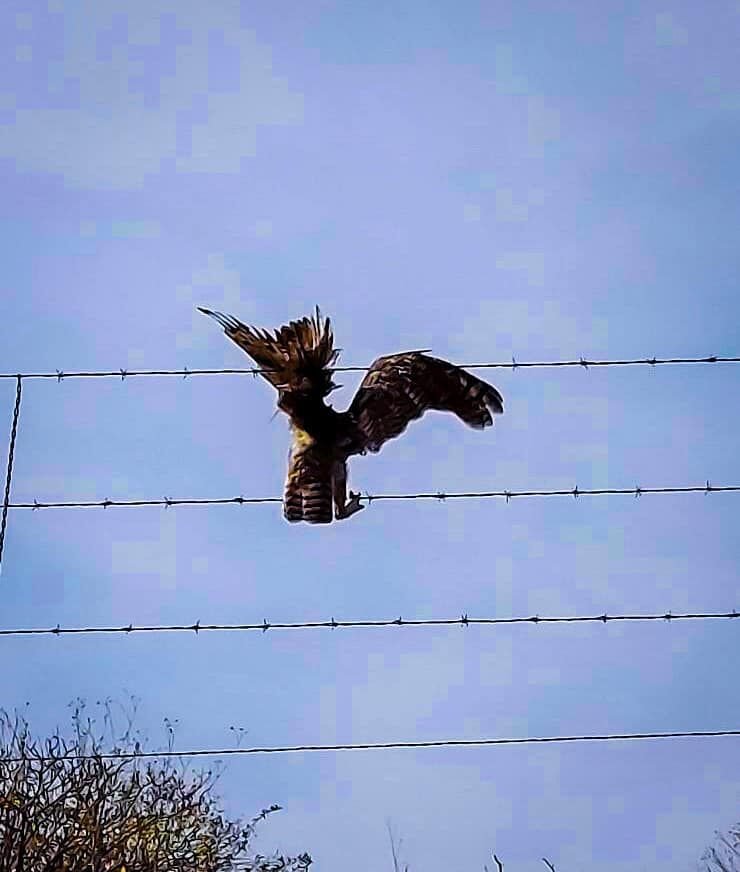 For a Great Horned Owl, a building inspector, and an Arizona Game and Fish information and education program manager, destiny came by way of a text.

Amy Burnett, who is with AZGF, was ending her day when a friend texted her.

The text described how a person was stopped on the side of the Beeline Highway near Fountain Hills, apparently trying to free a “raptor” from a barbed wire fence.

“I grabbed my wire clippers and gloves and headed out to the Beeline,” Burnett said.

When she arrived Jeff Miller, senior building inspector with the Town of Fountain Hills, was working to free what turned out to be a Great Horned Owl. The owl was tangled in the barbed wire fence.

“I was driving home (to Chandler) from work and noticed a bird flopping in my peripheral,” Miller said. “As soon as I could, I turned around and went back to see what was going on.”

He said he saw the owl and sprang into action.

“I took off my shirt and put it over the bird to keep it calm,” he said. “It worked.”

Miller said he saw the move on a YouTube video. He was able to keep the bird calm and removed one wing from the barbed wire, but then reached the dilemma.

“I wasn’t sure how I could get him free and then get him to safety,” Miller said.

He said he didn’t want to leave the bird, but he didn’t think it would be a good idea to put it in his car.

At that moment, Burnett, who is familiarly known as “Ranger Amy” in the community, drove up.

“She couldn’t have timed it better,” Miller said.

Burnett held the bird while Miller continued to work to get the second wing free. He left a part of the barb in the wing; they left it so it could be removed at the wildlife center.

Burnett took the bird to Liberty Wildlife in Phoenix where it was determined the owl had no broken bones. It has a sizeable wound on its shoulder, but Burnett said workers at Liberty are “cautiously optimistic” about the owl’s recovery.

Miller said he hopes he can be there when the owl is released back into the wild.

“It was really such a good experience for everybody, I think,” Miller said. “I am an outdoor lover. I can’t stand to see any creature struggling.”

Miller said he was glad he could help the bird, and was especially grateful to the person who texted Burnett and for Burnett coming to help him.

“It just worked out really well,” he said.