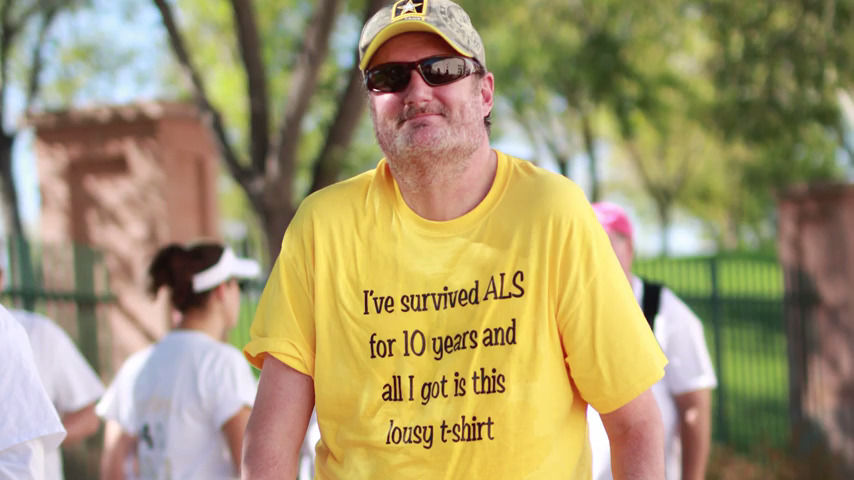 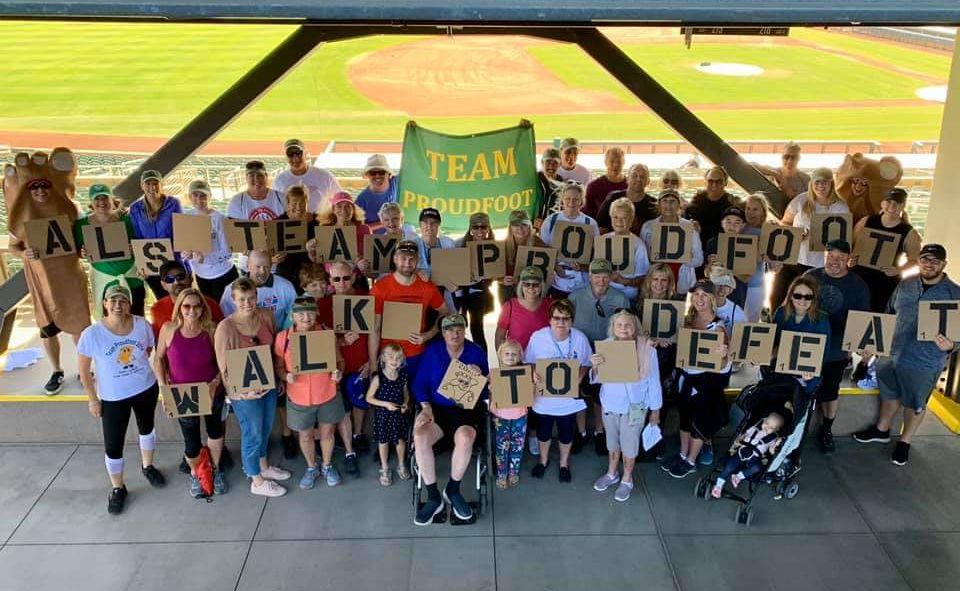 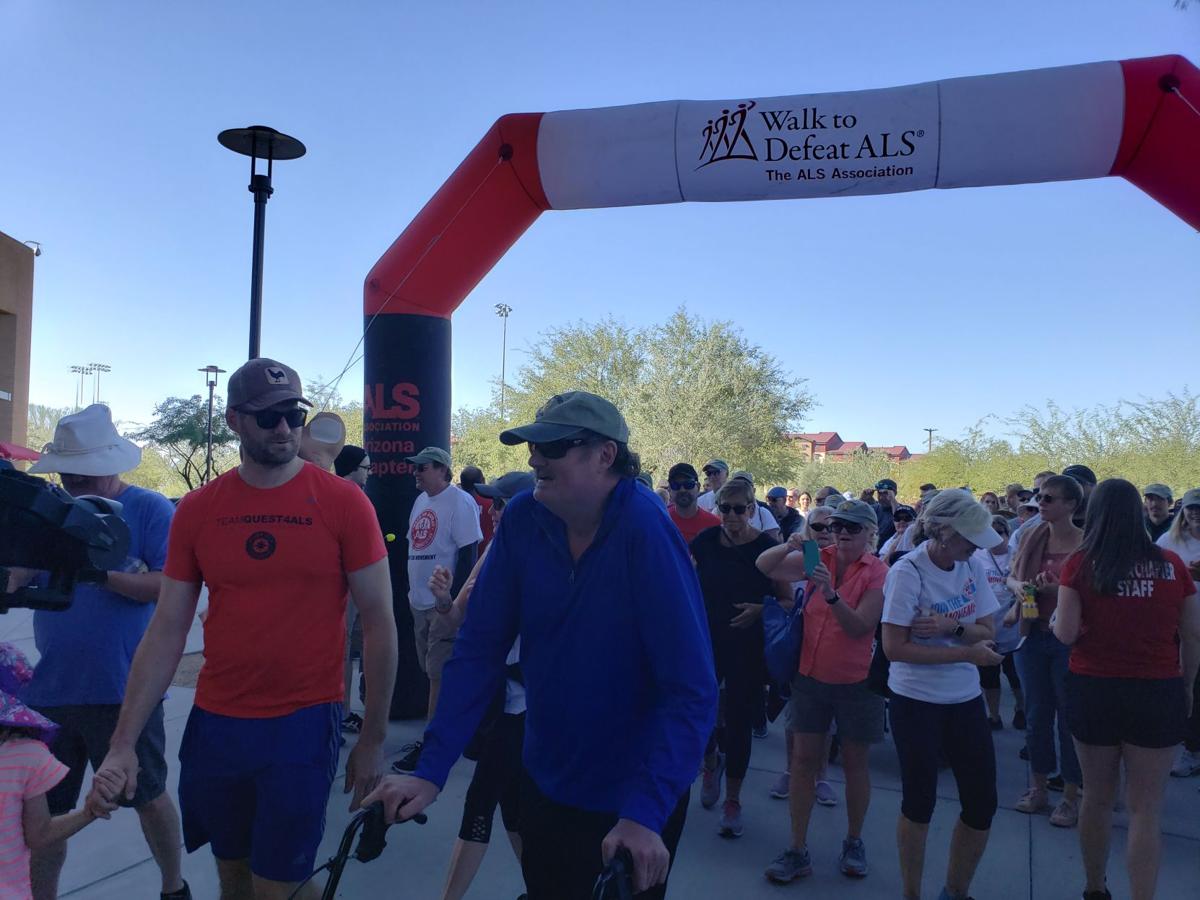 Chris Proudfoot lives his life just like everyone else, putting one foot in front of the other. Diagnosed with ALS in 2008, that process might require some assistance or take a little longer than it used to, but that doesn’t mean he’s “slowing down.”

Far from it, in fact.

ALS (amyotrophic lateral sclerosis), also known as Lou Gehrig’s disease, is a progressive illness that slowly robs the body of motor functions, such as the ability to walk, speak, swallow and breathe. The life expectancy for most diagnosed with ALS is two to five years from the point of diagnosis. Proudfoot, though, has obliterated those odds. He’s 11 years out from his diagnosis, and that’s time he’s used to benefit the lives of others living with the disease.

Proudfoot recently took part in the 2019 Walk to Defeat ALS. As in years past, he showed up and started his stroll hours before the event’s official start time in order to cross the finish line alongside his fellow participants.

He’s walked many miles in this fashion over the years. In that time, his friends and family have joined him on the trail, all raising money to support ALS research and awareness. This year, Team Proudfoot raised $21,605 for the cause. All told, the team has raised more than $111,000 over the years.

While Proudfoot is not a fan of the limelight, his dedication has earned him the recognition and admiration of his peers. That culminated this fall with the presentation of the National ALS Association Hero Award. Proudfoot was one of five individuals from across the country to receive this honor.

In a video highlighting Proudfoot’s contributions to ALS research, the Fountain Hills resident is described as “changing people’s lives by the way he lives his…a fighter who will not be defined by his disease.”

Proudfoot said he was diagnosed in May of 2008. After serving three years in the Army, he settled into an active lifestyle.

“The first signs were when I was playing basketball and I started falling down,” Proudfoot said. “I started working out more, doing leg presses. I was 34 or 35, so I thought maybe I was just getting older.”

Proudfoot said he went so far as to walk around with ankle weights to strengthen his legs, but it soon became clear that something was wrong beyond physical fitness.

“That went on for a few months, and then I started having trouble unbuttoning my pants, using my thumbs,” Proudfoot continued. “That’s when I started going to the doctor.”

Proudfoot underwent numerous tests and eventually found his way to a number of neurologists before arriving at his ALS diagnosis.

It was a life-altering diagnosis, but Proudfoot said it became clear he wasn’t quite fitting the mold of a typical ALS patient. His progression was slower, and he decided to use that fact to his advantage. He had a tremendous network of friends and family offering their support so, as a group, they formed Team Proudfoot and started raising funds and spreading awareness of ALS.

“I think it was 2014 when I really decided to take the opportunity to do some good,” Proudfoot said. “I didn’t mean for it to happen this way, but I gained a bit of notoriety and it kept building every year. More people wanted to get involved.”

Proudfoot said he’s never been the “rah-rah” guy. But since people were finding inspiration in his work, he reluctantly became the figurehead and is happy to continue spreading awareness and raising funds for a worthy cause. He’s quick to push the credit to the rest of Team Proudfoot, who he said have done tremendous work over the years.

“But I’m happy to do the walks and be an example,” he added. “If it wasn’t for my team, this probably wouldn’t even be a big deal.”

That team started with his mom, Helga, who got the ball rolling on the ALS walks and fundraising. Proudfoot said friends like Jenn Kabitzke came onboard and continued to energize the group, with more and more members eager to take part. There are more than 50 members now.

This past summer, Proudfoot was one of five individuals honored as an ALS Hero. While honorees came from all over the country, the ceremony happened to be hosted in Arizona this year, which Proudfoot said he was honored to attend.

“It was a little overwhelming, but it was interesting to see how the other four recipients went about things differently than me,” Proudfoot said. “All of them were great stories. It was neat to hear their different perspectives.”

Proudfoot explained that one recipient knits sweaters as a way to raise awareness for ALS. Another makes humorous videos and posts them online. Some get involved on the national level, going to D.C. every year to lobby.

“That experience was pretty cool,” Proudfoot said, noting that it inadvertently led to another recent highlight in his life.

Proudfoot is a big fan of the Oakland Athletics. He can be seen sporting a team cap and jersey in his ALS Hero video and even ends the clip stating, “let’s go, A’s.”

In 2018, Athletics outfielder Stephen Piscotty’s mother passed away after a brief battle with ALS. Proudfoot started wearing a Piscotty jersey in her honor, and someone tied to the team happened to be in attendance at this year’s ALS Heroes event. Proudfoot met with Piscotty as a result and has been invited to numerous team events as well. Proudfoot said it was an amazing chain of events that led to making some very special memories.

Looking ahead, Proudfoot has decided to branch out with his philanthropic work even further. He’s begun work on a possible endeavor to raise funds for “anything with wheels” for those who need them. From walkers to wheel chairs and maybe even vans, he hopes to respond to a need he has discovered goes beyond ALS patients to those living with a variety of other conditions.

When asked where he finds his drive to keep giving, Proudfoot’s answer was simple.

“I’m just doing what I can while I can,” he said. “I want to be an example that you can keep it going…I don’t feel obligated, but maybe I feel it’s a responsibility? Since I’m lucky enough to have a slow progression, I might as well do something positive.”

For more information on ALS or to get involved with next year’s Walk to Defeat ALS, visit alsa.org.